As I've stated in an earlier post, I've started using Eclipse (Ganymede) for writing C/C++ code. I work with Linux-based network switches at Ericsson and have been writing some kernel drivers for our hardware. At home, I've also done a bit of kernel work for the Openmoko FreeRunner (some improvements of the accelerometer driver).

Naturally, I'd like to use Eclipse for this work. The main advantage Eclipse gives over Emacs when working on large codebases is the source code parsing and indexing. This enables lookup of symbols, showing call hierarchies and "code assisting" for accessing structure members. Eclipse also grays sections of code which is ifdeffed out[*]. Very convenient. The problem is just to get the thing configured to understand the Linux kernel in the first place.

A particular thing about Linux is the configuration, which after menuconfig (or xconfig or ...) ends up as a set of defines in include/linux/autoconf.h. When a file in the kernel tree is compiled, this file is automatically included. Without trickery, Eclipse misses this and will gray out a lot of code which is part of the build and symbol lookup etc will generally behave bad. Without this configured in a good way, eclipse is basically on par with emacs while eating orders of magnitude more memory. Rats and darn.

What I'd like is basically this (Eclipse knows about CONFIG_PM!): 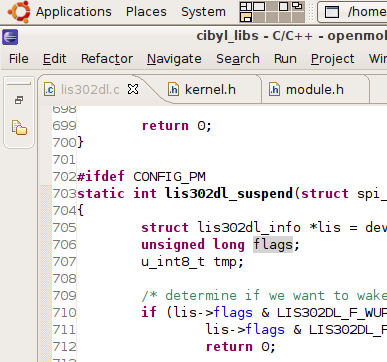 So how should this be configured? I'm not sure, but this is how I've done so far:


Once you are back, providing your computer hasn't overheated, eclipse will have indexed your Linux kernel source tree.

There are still some open problems I'm facing, kind lazywebbers are encouraged to present solutions to them:

Warning: The script below is badly written. Rerun it each time you change the kernel configuration.

[*] Ifdeffed might maybe become one of the first english words originating froma non-natural language context. Together with ifzeroed. Sorry, we've ifzeroed the subway today, No service.